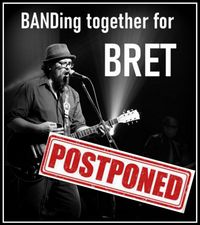 BANDing together for BRET: POSTPONED

Alexander was the principal songwriter with national recording artists The Badlees, one of the most successful bands to ever come from Northeastern Pennsylvania. He has also released critically-acclaimed solo material and has written and recorded with The Cellarbirds and Gentleman East. He has performed with those bands, and as a solo artist, for more than 25 years throughout Northeastern Pennsylvania. As the owner and operator of Saturation Acres Recording Studio, he has produced music for hundreds of regional artists, including the debut EP of the Breaking Benjamin. In 2015, he was presented with the Lifetime Achievement Award by the Steamtown Music Awards, which are a part of the Electric City Music Conference.

Alexander, who has performed at dozens of benefit shows over the years, has a genetic kidney condition that is requiring a kidney transplant. All proceeds from “BANDing together for BRET” will benefit the Bret Alexander medical fund as he recovers from the surgery. Showtime is 4 p.m. to 10:30 p.m. Tickets to the over-21 event are $15 in advance and $20 at the door. Sponsors are 105 The River, Karl Hall, The Woodlands Inn, LT Verrastro, Rock Street Music, The Times Leader, and The Weekender. The event will also feature raffles, a rock auction and will be accompanied by a GoFundMe campaign. Advance tickets go on sale on February 1 through Eventbrite.

Kicking off its 10th anniversary year, The Exchange welcomes Ed Randazzo & Bret Alexander back to Berwick in January 2020! We hope to see you at A Perfect Blend on the 18th at 7 p.m.!

$5 donation at the door; food and drink available for sale.

In the event of snow or other wintry weather, we will let you know during the week if we need to postpone the concert to Sunday, the 19th.

For information on the complete 10th-anniversary concert series -- ten concerts in ten months in ten venues throughout Columbia and Montour Counties -- visit ExchangeArts.org/10th-anniversary.

Bret Alexander and Friends will perform music from this historic event. Channel your inner hippie, hop in your VW, and help us celebrate!

This special show is FREE to Early Arrival Campers and OPEN to General Ticket Holders!

Since the summer of 2017, The Exchange has hosted monthly Listening Rooms in its gallery space on Main Street in Bloomsburg: intimate concerts with no glitz and no distractions -- just the musicians, the audience, and the music. Now we bring the experience to Berwick with two great musicians, Ed Randazzo and Bret Alexander!

$5 donation at the door, BYOB permitted. Seating limited, so get there when the doors open at 6:30. You'll find A Perfect Blend at 135 West Front Street in Berwick, Pa.

We want to make this event the first of many in Berwick, and your attendance and enthusiasm in June will help make this happen.

Originally from the Scranton/Wilkes-Barre area of Pennsylvania, Ed's been wowing audiences with his papable performances and engaging and joyous stage presence for the past 10 years. Ed is celebrating his 10-year music making milestone with a new collection of favorites and unreleased tracks called "WHO'S THAT MAN?: COLLECTED SONGS 2008-2018"

Who's that Man?: Collected Songs 2008-2018 is now available digitally and on limited edition CD. On this night, we are celebrating the special limited release of Collected Songs on VINYL!

This is a B.Y.O.B. event. With a suggested donation of $5 at the door.

For a year and a half, The Exchange has hosted monthly Listening Rooms in its gallery space on Main Street in Bloomsburg: intimate concerts with -- no glitz, no distractions, just the musicians, the audience, and the music. Now we bring the experience to Berwick with two great musicians, Ed Randazzo and Dustin Douglas!

$5 donation at the door, BYOB permitted. Seating limited, so get there when the doors open at 6:30! You'll find A Perfect Blend at 135 West Front Street in Berwick, Pa.

We want to make this event the first of many in Berwick, and your attendance and enthusiasm in January will help make this happen.

Ed Randazzo & Bret Alexander mark their 10 year collaborative anniversary this fall with the release of "Who's that Man? | Collected Songs 2008-2018". Come out and celebrate this duo's creative partnership as they reflect on a decade of friendship & music live in the Brew Pub!

More on this new record:

Compiled by Randazzo, this project gathers together essential cuts along with fan-favorites from across the Randazzo/Alexander catalog thus far with the addition of TWO, BRAND NEW recordings including the lead single, "Soldier, Soldier".

Mark your calendars now for next Wednesday, October 10th, as Ed Randazzo and Dustin Douglas perform at Canteen Park in Kingston. Randazzo is a much celebrated, award-winning blues/roots singer-songwriter, and Douglas (Dustin Douglas & The Electric Gentlemen) captures the vibe of late 60’s and 70's with his blues-laced rock-n-roll. Break up your week with this killer pairing!

Music On the Menu LIVE

Music On the Menu with Alan K, Stout welcomes Ed Randazzo back to the Breakers stage as well as the FM dial on WEDNESDAY, OCTOBER 3! Tune in to 105 The River or stop down for an in-person show!

Randazzo will be joined on stage by his friend and long-time writing partner and producer, Bret Alexander.

Ed and Bret will mark their ten-year creative partnership this fall with the release of Ed's newest milestone collection entitled: "Who's that Man? | Collected Songs 2008-2018".

An Evening with Bret Alexander

Not your everyday violinist, Nyke Van Wyk has been captivating audiences for years. With his diverse musical background and unique blend of styles, you’re bound to hear a violin performed as you’ve never heard before. He, has traveled far and wide performing with incredible musicians around the globe, armed only with his violins.

On September 7th, at the Mauch Chunk Opera House, for the first time ever Nyke will be uniting a company of all-star musicians he’s written with, performed with and respected throughout the years. The evening will showcase a selection of originals featuring performances with Bret Alexander, Adam Web, Genevieve Gillespie, Laura Shay, Dustin Douglas, and perhaps a surprise or two more!

Ed Randazzo & Friends will be performing for our Sunday "Gos-Blues" show this year!! Ed's rich and powerful voice leads an All-Star band as they serenade you through a Sunday morning of inspirational music.

Sunday "Gos-Blues" will take place on the Back Porch Stage this year, so get your tickets NOW to be a part of this intimate morning of music!

Music at the Market Concert Series 2018

Homegrown food and music all in one place! Get out and support your local farmers & musicians!

Just ahead of this year's Briggs Farm Blues Festival, Ed Randazzo stops by WBRE's PA Live! with an acoustic, in-studio preview of his July 8th performance as part of "Gos-Blues" Sunday down in Briggsville USA!

An Evening with Ed Randazzo & The Husty Bros.